Every three weeks or so, I have one really antsy day about the pandemic. Not to take it personally, but it's ruining everything. Dustin and I have been predominantly military restricted and buried in home improvements since March. On this particularly irritable day each month, I get cabin fever and I need to get out. We decided to do something before the curtain closed on the summer of Corona (like run 100 miles). When our schedules didn't align, we decided to each run 100 miles.

A triple digit run is good maintenance every six months, according to Dustin. Why? I suppose lest we forget how to suffer, take sitting for granted, or forget how dumb we are. I haven't pushed into those shadowy places of pain and patience an ultra funnels you into since February. Zion 100 was cancelled this spring, but I was still registered for it virtually. A buckle was already sitting in a drawer waiting to either be won or garbage.

Dustin ran his 100 two weeks ago during a monsoon. For 24 hours it rained on and off (mostly on) and somehow he finished in 99% humidity and wildly bipolar temperatures without complaint. As his daughter shrugs and says nonchalantly, "He's tough." I think his superpower is actually the adventure hat.

We both treated the virtual run similarly to a real race; once the watch started it did not stop, even if we did, until the odometer said 100. At the same time, there were no cutoffs or courses. We were each other's aid stations. Of course we took it very seriously.

Let's quickly summarize the Sandias: the trail traversing the crest is 27 miles long and zags between 6,500'-10,500'. It is incessantly rocky and often overgrown. Even fast miles are slow, at least for me, but I love the ruggedness. I decided to run from the front door to the south side of the mountain, then run across the whole range to the north terminus, and back. I'd finish up the remaining miles around Albuquerque.

Dustin made up his route as he went, up and down and around the mountain chasing creeks because water is terribly scarce in the Sandias. I met him on the backside of the mountain to deliver dry clothes in hopes of staving off hypothermia as the afternoon fell and more rain rolled down the mountain, and once more that night to deliver the highest calorie Five Guys meal on the menu.

He came back at 1am for a twenty minute rest and we headed into the early morning rain to wrap up the final 38 miles. At mile 97 we passed a little park with benches and grass and shade. His feet were exceptionally tender from the punishing quartzite and feldspar, and he wanted to lay in the grass. I looked up the sky, which was starting to boil. I looked at the mountain ahead, which was pushing towering thunderheads toward us. "No," I said, "no stopping." Ohhh come onnnnn. Brutal. Heartless (I know, I know). "I'll spit on you," I threatened. Dustin laughed. "No you won't," he said as he prepared to lay in the grass. "Yes I will, " I answered seriously. I filled my mouth with water from my pack. He broke into a grin and we ran on. It was time to finish this. His watch turned over the final mile as we returned to the driveway for the last time.

Two weekends later it was my turn.

The weather was prime for August in New Mexico -- a mere 70 degrees by 4:30am. We headed out before sunrise. He would tell you that he paced from the start to be supportive, but I suspect he really just didn't want me to crush him at our summer douchebag vert challenge (we are currently tied). There aren't a lot of rules to this virtual thing, not really, so a pacer at the start? Absolutely. We took off down the pavement, two miles to the mountain.

Sunrise painted the distant peaks soft purple. Dustin filtered water from a little creek to refill my pack and left me at the South Peak, twenty miles in. We found a bunch of little grumpy lizards. Don't worry, I stopped to photograph them all.

I accidentally climbed the mountain twice in those first twenty (one trail I chose was extremely misleading on a map and neither of us had run it before), so I was several thousand feet into climbing already. Oops.

That's ok, I made up for it at the end by running a bunch of flattish miles in the foothills and at the bottom. This was not a race to stress over. This was for fun, for pain, for satisfaction. There's something immeasurably relieving to do something you said you would do. In life, in running. I looked at this race as the completion of a commitment to self. Everyone will tell you that you can't run long distances without a reason, and personal integrity is always a well that never dries up.

The fun part. I climbed up to the North Peak, the highest point of the range, both hungry and tired. I took a spur trail to an overlook where I could see the entire crest spanning behind me. How stupid was it that anyone could run that far. My watch only read 31 miles. Such a small number for the expanse of land already underfoot. I laughed aloud to myself as I put my shoes back on and ate my almond butter summit biscuit. Sit break over.

There were 11 miles left along the crest until I dropped into Placitas, my first aid station.

It's normal for me to feel the first rush of running, that moment of oh my gosh, I loooove this somewhere around mile 35 or 40. I wore that smile on my face the whole way down the north side. The sky clouded over, rained a little, and it was all so happy.

I dropped into a place called Tunnel Springs to find a lavish aid station, extravagant and welcoming (those provisions ended up being even more incredible later; note that box of donuts). And even though I upchucked most of that burrito on my climb up to Piedra Lisa after that, it was delicious at the time.

Sunset desert photos are trash. It's almost a disgrace to try and show you how beautiful the earth was that night.

I switched on my headlamp and hit a trail that I know to be relatively cruel. I explored it once earlier this summer in search of douchebag vert because it's a lot of climbing in a short distance. It's a lot, lot longer when there's water and gatorade at the end of it and every step up makes you want to dry heave some more, just in case there's more in there sloshing around. I probably undershot my electrolytes during the day somewhere (actually I'm sure of it because the night after the race I woke up in the middle of the night soaking in sweat).

I'd make myself to climb for three songs before checking my watch only to see that 0.21 miles had passed. Ok, maybe that's an exaggeration, but sometimes time stops turning during an ultra. It's a 3,000' climb. When you realize how slow it's moving, I swear it stops entirely. Just to curse you back for cursing it first.

Dustin met me one final time for a quick pack refill and to try and get some new calories down before night fully set in. He would head home and rest while I ran back to the house, and then he'd pace the last 35 miles. When I got to the bottom, he'd left a treat for me at a local restaurant known for putting water out on a table for morning exercisers.

The moon was enormous and rose behind the mountains I'd spent all day in. Another thing I wish I could show you. Some things you just have to experience for yourself I guess. I put in my earbuds and headed down the tram, which is a main bike trail back to Albuquerque. Sometimes you just need to jam a little or be a little weird in the middle of the night (this one too). Besides a weak stomach, I felt like I was running marathon pace (of course Strava later confirmed those were like twelve minute miles).

When I got back, I was hot and it was 2:45am. My feet were tender too. I set an alarm and lay on the couch, but instead I shivered for fifteen minutes and woke Dustin up. While getting ready to go, I accidentally threw up my Ensure. But, I was adamant that I was ready. Halfway through our ten mile chunk, I started to struggle. Sick. We ran past a Circle K with a man cackling like the joker to himself and pacing back and forth in the parking lot. He wandered out onto the trail and started following us, still laughing hysterically. Yay, more fast miles!

Dustin encouraged me to get in a real bed to sleep for an hour, which I agreed to after we did the math. An hour of sleep can turn 30 minute miles into 15 minute miles, and I only had 25 left. Ok. Ultra sleep is pitiful, but it helped a lot. He made eggs and toast and coffee and we settled into the final grind. For a moment I was bummed that we'd have to blister in the heat a second day because of my rest break, but there's not a lot of room for self-pity in ultrarunning.

I knew I'd finish; there was no doubting the tenacity of the thing. But, I will not sugarcoat the miserable portion of it. This was probably the hottest ultra I've run so far. I have had an entire year of learning to fulfill promises and complete resolutions, though, and I had no real thought of quitting. It's a good thing to learn not to be afraid of doing the work.

The temps climbed toward 100 and we ran back uphill to the mountain to say goodbye before completing the final miles on blistering city pavement near the house. We passed through the same park Dustin wanted to lay in during his race, only he was generous enough to lay in the grass beside me instead of spitting on me. He's a lot nicer than I am.

The finish was unceremonious and happy. Shower, pho, bad sweaty sleep, work in the morning. Until next time, Sandias. 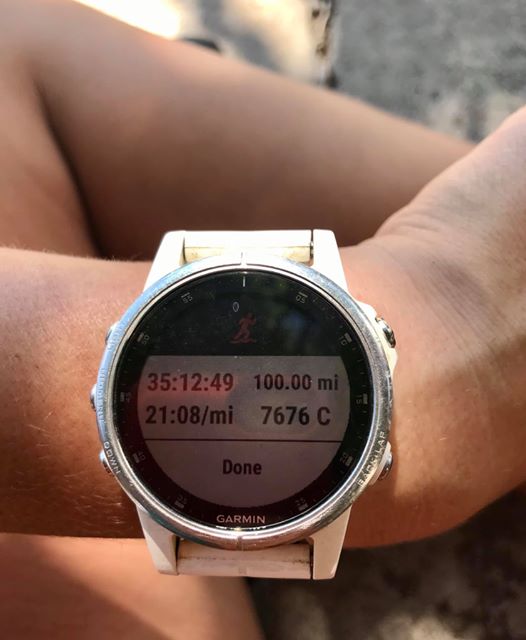 (Just kidding, we've both been running this week to finish up our climbing challenge.)