I lost a race last weekend.

Lost it at a race, I should say.

Voyageur is a historic 50 mile trail ultra through the woodland forest surrounding the St. Louis River near Duluth, MN. It’s run in the heat of July from Carlton to Superior over rolling rhyolite. First, I lost everything in my stomach. In the sun, I became too nauseous to run. I lost sight of my goal when it sped around a curve and over a hill. Then I lost my nerve.

In fact, I’ve been in a season of losing.

Tenets of family. My dog, right in front of me. Normalcy. For weeks I’ve had Elizabeth Bishop’s words tumbling between my ears: “then practice losing further, losing faster.” I want to scream, don’t you know that already happens? Losing spirals out of control by nature. Next I lost my routine. Energy level. Motivation. Healthy habits. Keep naming names.

At Voyageur, I felt like the last of something was used up. I’ve spent all week trying to get it back, to figure out what it even was. This morning I tried to run long, and I ended up pathetically shuffling along after only a few miles. I gave up completely halfway through. I stopped and ate raspberries. Some were sweet, some bittersweet. Their season up north has peaked and passed.

Is my season over? I whisper, as if I won’t hear my own thoughts. The words it can’t be lodge in my throat. I have so much left to do this year.

Loss is wearing, more than I cared to admit to myself. I had 15 miles left on the trail through Jay Cooke State Park, so I began to march. Humbled, beaten up, tired.

At mile 42 I found my husband at an aid station. I instantly craved comfort and wanted to quit. I walked to our Subaru and sat in the back, trying to eat and drink something. Sloppy salty tears tumbled down my cheeks. I wasn’t crying from the miles – at least not just because of them – I love 50s. The physical and mental exertion cracked open a dam I had been braced tensely against. Voyageur released the flood.

I rubbed my eyes and started walking back to the trail. Even if there were reasons to drop, I knew I would not. None of the reasons were stronger than my commitment.

A handful of miles from the end, I saw my friend Kevin in front of me. He was also heat-exhausted and trudging, We found a few laughs. Distractions, a story or two. Smirks. We both knew the other felt like garbage, but we didn’t turn our struggle into a whine fest. We silently empathized with the other and pulled at the bootstraps to get to the finish. We ran as much as possible and kept pace with each other when it wasn’t (or when one of us was dry heaving into the bushes).

The finish line was bittersweet. I was proud to have gutted it out and receive my pottery mug, but I was also disappointed in the way I jumbled the day. The perfectionistic vein was oozing all over my failed nutrition, disregard for electrolytes, preoccupation with company and lack of self-care, self-awareness. I know better. 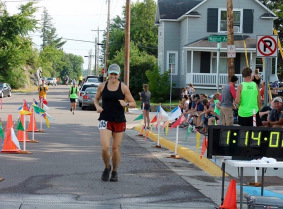 I’ve laced up half a dozen times since Saturday. With friends, alone, on trail, on road. I still don’t have it back. I left something out there that hasn’t returned yet. I tell myself that it’s ok to be discouraged, that it’s just a season. Like an injury, it can be healed. It’s just the middle of a long climb, of course it burns.

Ethos, pathos, logos: wherever the taproot of the problem is anchored, it can’t be worked out or soothed without patience.

If I take three steps forward, and one step back, I convince myself that there’s no progress at all. This is another weakness of perfectionist belief. It is discouraging thinking, especially when you’re tackling something in life that is a steep climb. Switchbacks fool you into thinking you’re just going back and forth, back and forth.

If you were to turn and look down, you would be able to see how high you’ve climbed. My world looks different from this new perspective from a year ago, even six months ago. I love what I see when I look behind me, but I’m not at the top. Not yet. I see a long stretch of inclines in front of me.

Last month, when we hiked up Crow Peak (a 6 mile out-and-back up and down a huge ridge), I kept taking pictures whenever there was a clearing. I couldn’t help myself; the ponderosa alpine line and paintbrush flowers peppering the hillside astounded me. Each new elevation revealed new terrain and ecology. We topped out, had a snack, and headed down.

During the drive back to Spearfish, I sat in the passenger seat and flipped through the photos on my phone. All the majesty in the photos I took during the hike was overshadowed by the final shots from the summit. There’s nothing disappointing about the journey, but the greatest reward is not found until the end.

Seeing an expanse of switchbacks stacked above should excite me that there is a great summit in the future. But it’s easy to feel discouraged by infinite climbing. Back and forth. I have been looking at the trail ahead with the wrong perspective. I tell myself: There is no point to settle in the valleys when you’ve stood on mountaintops.

I shuffle, trudge, walk, and run on.